Artificial Intelligence (AI) has the potential to disrupt life and work as we know it, but given all that is going on in the world, why is now the right time to tackle this particular industry or problem? In finding an answer, we must first identify where we are along AI’s continuum and understand why now might be a pivotal point in its life. By Max Reiff, US Consultant at Haflo AB

Failure helps give rise to success.

While forgotten by many, artificial intelligence has been around for some time. Initially conceptualised in 1950 by English Mathematician Alan Turing and later dubbed AI by John McCarthy, the technology eventually grew to become one of the most speculative and well-funded sectors of its time by the 1980’s. Ultimately, however, speculation spiralled out of control and advancements in the field had little to show for themselves years or even decades later. This period later become known as the AI winter, due to the lack of achievement within the sector despite immense speculative funding. It can be argued however that this initial rise and fall helped lay the foundation for today’s success due to the awareness it raised. Several decades later and AI is today among the most heavily funded categories of the past three years, steadily achieving new funding highs and dwarfing the 1980’s craze as a whole according to data from CB Insights. 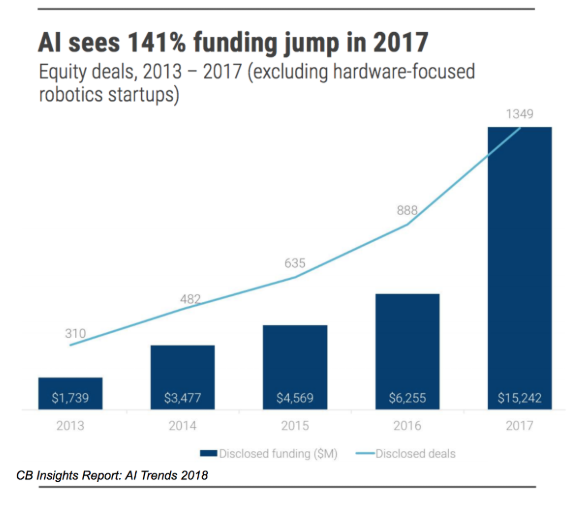 So where does this leave us?

As investors, it is our job to both decipher and de-myth the hype. While companies like Tesla continue to sell the dream of a coming software update that will finally unleash full driverless autonomy on the world (using AI), the truth is that we are now midway through 2018 and little has changed. The same goes for the virtual assistants that Apple (Siri) and Amazon (Echo) unveiled to the world in October 2011 and June 2015 respectively. Despite that both systems get smarter as they interact with users, the fact remains that one cannot rely on either of them to do much else other than set a timer for an egg or play a simply titled song. This is because we still live in a world of Weak AI: AI focused on and capable of completing only single narrow tasks. We aspire however to achieve Strong AI: AI with consciousness, sentience, and mind i.e., the ability to apply intelligence to any problem rather than just one specific thing.

Hype aside, AI has some things going for it:

Given the above, the general technology behind AI is now more prevalent than ever, and the barriers to entry are consistently lowering. For one, machine learning — a subset of AI that gives computers the ability to “learn” from data without being explicitly programmed — is no longer an exotic technology. In fact, today it is a principal building block for modern software and applications around the world. This has led to an abundance of AI for X; a phenomenon in which there now exists an AI company for nearly everything.

With Weak AI finding its way into nearly every niche, some are beginning to understand how to leverage its power. Companies like Netflix and Spotify use Weak AI for narrow tasks such as qualified content recommendation, while others like Facebook and Amazon use it to perfect targeted advertisements. Compound this with services from Salesforce and Apple, which have the ability to understand user sentiment via text analysis and facial recognition respectively, and the crumbs of well-harvested datasets start to tell an even bigger story. In other words, data from all verticals starts to provide an all-encompassing view of what humans do, while actions become the product of a statistical confidence value that enables broader AI decision making, i.e., consciousness. Thus, it can be argued that Strong AI is actually a product of Weak AI datasets and that therefore it is only once we truly understand and perfect Weak AI (and its outputs) that we gain the potential to successfully execute Strong AI.

Given the lowered barriers to entry for everyday applications, advances in theory and algorithms, as well as open source availability, Weak AI is quickly integrating itself into every aspect of our lives. Due to ease of implementation, we should expect to see an abundance of “AI companies” born in the coming years, as is already happening. While most will fizzle out, the data they leave behind will not. The companies that survive will grow to become dominant forces in our world, working in the background of our everyday lives and managing troves of data. An example is China’s SenseTime Group, which recently received one of the largest venture capital investments in the AI space — a $600M Series C investment led by Alibaba. SenseTime develops facial recognition technology that can be applied to payment and picture analysis and used with bank card verification and security systems. The company claims that its facial recognition technology has an error rate below one in 100,000 and is now being integrated by the Chinese Communist Party into China’s vast camera network. In time, the abilities of AI within a single system will broaden given the datasets and advancements taking place within the field. How to connect and make sense of all this data will prove to be the biggest obstacle.

After all, if humans themselves struggle to understand the abstract mechanics of thought, how do we program machines to do so?